Below are several tips to help new players.

Buildings are very important. If an attack is expected, build walls or defensive towers. If enemies are not nearby, build troop generation buildings such as barracks to help generate an army.

Creating an army out of a single unit type will result in that army being eliminated by an enemy mixed army. Use a combination of defensive/melee units, ranged units, and healing units to fight against enemy armies. Train a mix of spearmen and swordsmen, as they have different strengths and weaknesses 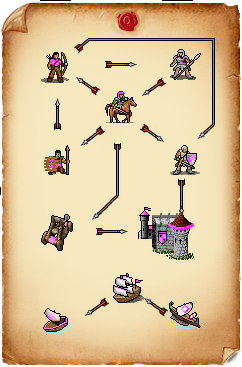 Skirmishers [Skirmisher]: Weak to only cavalry particularly, but low hp; Strong against archers

Hybrids of similar cost are less useful in filling any one role and have the weaknesses of all their parent classes. Avoid engaging stronger enemy units with weaker units in melee (ranged attacks have no risk of retaliation in most cases). If you have to (as in some campaign maps), try attacking first and minimising damage received. Healers are adept at converting units with low mental resistance (e.g. Elephant). Workers can stall enemy units not suited to dealing with structures using light fortifications (e.g. Frisian Horse).

Defend Your Support Units, While Attacking Your Enemy's

A narrow area, such as a bridge, or mountain pass can slow the progression of a large army. This will can give you time to train, move, or heal units as well as pelting the enemy army with projectiles.

Use Waypoints to save time

When the battle is not directly near your training areas, migrating newly trained units can take some time. Waypoints can automate the repetative process of moving units. Set waypoints to bring units to the general area of a battle.

Try to research technologies if you have spare capacity or in a large map. They will pay off in the end. A Blacksmith or Advancements Centre is very useful. You can delete them later to free up space for training units.

Logistics are the most important part of a battle. Try building roads, bridges, transports, wagons, and factories (especially mines, as they are not limited by TC number) when you have the time.

Community content is available under CC-BY-SA unless otherwise noted.
Advertisement